Allergies are known to occur as a result of a number of factors. Depending on the cause of the condition, the symptoms may differ. If you suffer from a food allergy, it may result in the development of symptoms such as hives, swelling of the throat and lips, a tingling sensation in the mouth and anaphylaxis. A drug allergy may trigger symptoms such as itchy skin, hives, facial swelling, wheezing and rash. An allergy to insect stings may result in symptoms of excessive itching all over the body, tightness of the chest, shortness of breath and excessive swelling at the site of the insect bite. Hay fever, also known as allergic rhinitis may trigger symptoms of runny nose, swollen eyes and congestion. In some cases, food and insect stings are capable of triggering anaphylaxis, which is a serious condition that may trigger symptoms such as shortness of breath, light-headedness, nausea, vomiting, skin rash and swelling of the airways.

There are known to be several causes of allergies. The most common allergens include certain foods, insect stings, certain medications, latex or other types of fabric and airborne allergens. Common airborne allergens include animal dander, mold, dust mites and pollen. Foods that trigger allergic reactions include peanuts, wheat, soy, fish, eggs, milk and tree nuts. Penicillin or penicillin-based medications may trigger allergic reactions as well. Bee stings and wasp stings are known to be common allergens as well. 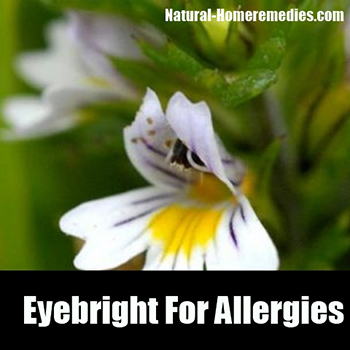 Eyebright is an herb that is a part of the Figwort family and is considered helpful in the treatment of allergies. The University of Michigan Health System states that eyebright is an herb that is helpful in treating symptoms such as sinus problems, eye and nose congestion, eye fatigue, eyelid inflammation, hoarseness as well coughs associated with allergies. The aerial part of this herb is mostly used in medical preparations for treating a host of health ailments, including allergic reactions. Author of the book Therapeutic Herb Manual, herbalist Ed Smith states that eyebright is an herb that exhibits anti-inflammatory and antihistamine properties for reducing inflammation and irritation of the throat, sinuses, bronchi, eyes, ears and nose. 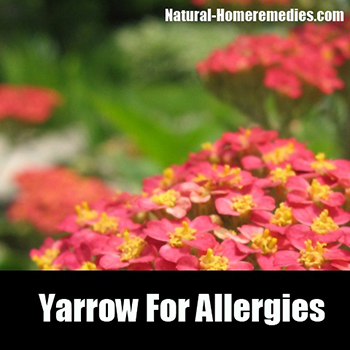 Yarrow is an herb that possesses a bitter and pungent flavour as well as exhibits cooling and drying properties. Author and naturopathic physician, Dr. Sharol Tigner states that yarrow is an herb that possesses anti-inflammatory, antifungal, antiseptic and astringent properties. It is also a stimulating diaphoretic that may prove effective in the treatment of congestion associated with allergic reactions. It is also considered an effective pain reliever. Dr Tigner states that the ability of this herb in reducing pain is due to the fact that it inhibits prostaglandins. Prostaglandins are substances similar to hormones and are responsible for triggering pain as well as inflammation. 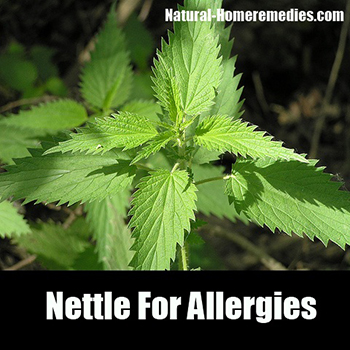 Nettle is an herb that may prove effective in the treatment of allergies, especially allergic rhinitis. Dr Sharol Tilgner states that this herb is helpful in aiding the proper functioning of the respiratory system. It is beneficial in treating watery nasal discharges as well as itching that are commonly associated with allergic rhinitis. Nettle is available in the form of a tea, liquid and capsule. 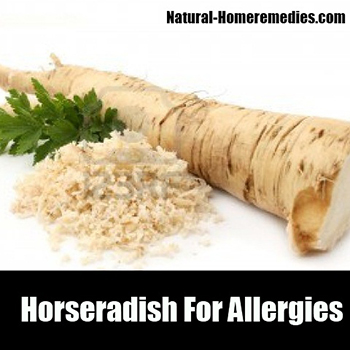 Horseradish is an herb that is a part of the cruciferacea family and has been used extensively to add flavour to foods. Horseradish is used to clear the sinuses. Dr Tilgner states that horseradish plays the role of an expectorant that helps in clearing out the thick mucus present in the nasal passages, thereby helping in reducing the symptoms of allergic rhinitis. However, it is important that you consult your doctor regarding the long-term usage of this herb. 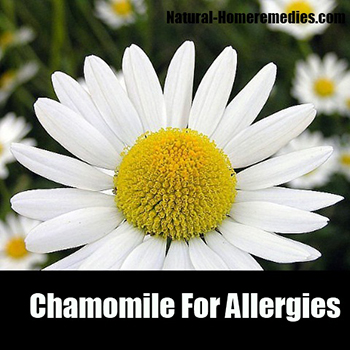 Chamomile is an herb that is considered effective in the treatment of allergies. Chinese-herbs.org states that chamomile possesses anti-inflammatory, antispasmodic and antihistamine properties that may help in treating allergies. Chamomile can be ingested in the form of a tea that may help in reducing the length of the allergic attack.

In his book Back to Eden, health expert Jethro Kloss states that the active ingredient named capsaicin, which is present in cayenne pepper is used extensively due to its numerous medicinal uses. 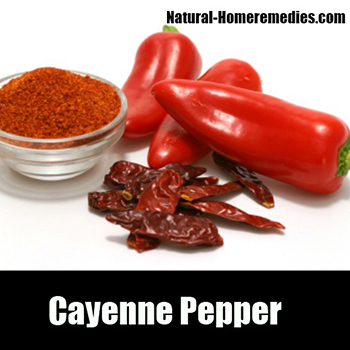 It possesses anti-inflammatory properties that help in reducing inflammation of the sinuses and nose as well as clear the sinuses. You can consume this herb in the form of a tea for treating allergies by adding a pinch of cayenne to a cup of warm water and consuming it. You can also add cayenne pepper to your food as it has the same effect in both cases.

Honey is considered an effective home remedy for treating allergies as it plays the role of a natural antihistamine and decongestant. It is important to note that you should always consume honey in its pure form to treat allergies. 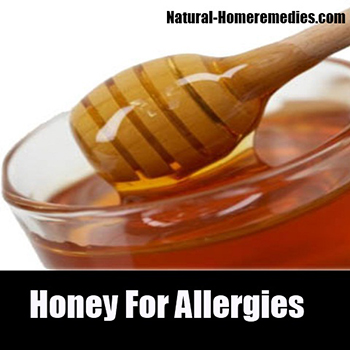 Avoid heating honey as it is known to destroy the antihistamine benefits possessed by this food. Organicfacts.net states that this home remedy is helpful in enabling your body to resist pollens. Honey is also helpful in treating excessive coughing, which is often associated with allergies. This is due to the fact that it coats the throat, thereby soothing and healing the inflammation and irritation of the throat. To use honey for allergies, you need to consume one teaspoonful of honey three to four times each day. 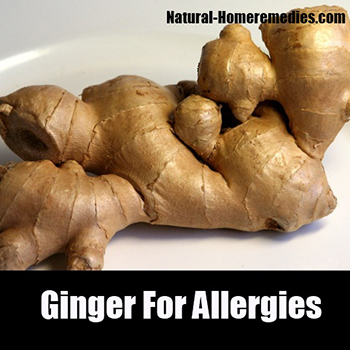 Ginger is an herb that is considered extremely helpful for treating allergies. Organicfacts.net states that ginger is known to play the role of an antihistamine and decongestant, thereby helping to treat an inflammatory response triggered by an allergy. To use ginger in treating allergies, you can consume it in the form of a tea. To prepare ginger tea, take an inch piece of ginger root and allow it to boil with one cup of water for around 10 minutes. Allow the tea to cool down and consume it. For added flavour as well as health benefits, you can add a teaspoon of honey to the tea as well. 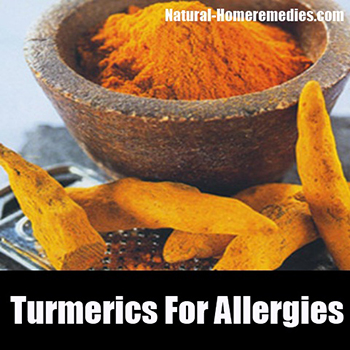 Turmeric is an herb that is used extensively in India for adding flavour and colour to food. It has also been used widely in Asian and Ayurvedic medicine due to the fact that it possesses anti-inflammatory, antioxidant and antiseptic properties. It is also considered helpful in the treatment as well as prevention of allergy symptoms. In the journal Molecular Nutrition and Food Research, a research study was published that documented the effects of turmeric for allergic reactions. The research study indicated that turmeric is helpful in preventing the release of histamine from mast cells. Histamine is known to be a compound that is released by the cells of the body in response to an allergic reaction, resulting in the dilation of the capillaries and contraction of the smooth muscles. However, it is also possible for an individual to suffer from an allergy to turmeric. This allergic reaction triggers symptoms such as stomach upset, heartburn as well as dermatitis. It is advisable that you seek medical advice from your physician before using this herb.

Butterbur is considered an effective herb for treating allergies. The University of Maryland Medical Center states that two research studies have shown that butterbur extract is equally effective in treating hay fever in comparison to Zyrtec and Allegra. Health experts recommend the consumption of around 50 mg of butterbur root extract two times each day. The long-term effects of this herb are not known till date. Therefore, it is important that you consult your physician regarding the correct dosage and long-term use of this herb. In some cases, butterbur may trigger certain side effects such as stomach upset, fatigue and headache.

Other Home Remedies for Allergies

Histamine is the compound that is considered responsible for triggering allergic symptoms such as hives and itchiness. Carolyn Dean, Medical Director of the Nutritional Magnesium Association states that vitamin C is helpful in deterring the inflammatory cells from producing histamine. In addition to inhibiting histamine, vitamin C is known to possess anti-inflammatory properties that help in reducing inflammation associated with allergies. Foods that contain high amounts of vitamin C include watermelon, strawberries, oranges and apples.

Magnesium is known to play the role of an antihistamine and bronchodilator, thereby proving effective in the treatment of allergies. According to a research study conducted by the Brigham Young University on a group of animals, it was observed that animals who were deficient in magnesium suffered from high levels of histamine in their bloodstream on contact with allergens compared to those animals that had enough magnesium in the blood. Foods rich in magnesium include beans, legumes, pumpkin seeds, sunflower seeds, spinach and Swiss chard.

Health experts have stated that when vitamin E is present in its gamma-tocopherol form, it might prove effective in reducing inflammation associated with allergies. According to a research study conducted by the Michigan State University, it was documented that those animals that were given high doses of gamma-tocopherol experienced less inflammation of the nasal passages in a heavily polluted atmosphere as compared to those who were not given gamma-tocopherol. This is due to the fact that vitamin E exhibits anti-inflammatory and anti-oxidant properties. Foods that contain vitamin E include mango, kiwi, blueberries, almonds, peanuts, Brazil nuts, fish and green leafy vegetables.

Even if you are undergoing treatment for your allergy, it is still recommended that you avoid triggers. Common triggers of allergic reactions are airborne allergens, foods with nuts and certain medications. To prevent the occurrence of an allergic reaction, it is important to know the exact reason for the allergic symptoms. You can easily find out the exact cause of the allergy by making use of a diary to note down all your daily activities and the time when the allergic symptoms begin to develop. This may be helpful for your physician to diagnose the condition properly.

Other Treatment Options for Allergies

Decongestants are considered effective in reducing the inflammation as well as production of mucus associated with an allergic reaction. Pseudoephedrine is a common ingredient incorporated in over-the-counter decongestants. Brands that market decongestants are Sudafed, Non-Drowsy and Drixoral. Decongestants are widely available in the form of pills or liquid. There are certain side effects associated with the use of these medications and they include insomnia, irregular heartbeat, irritability, headaches and elevated blood pressure.

Corticosteroids are helpful in preventing as well as treating the symptoms of allergies. Prednisone is a common corticosteroid that is used to treat several types of severe allergies. These medications are always prescribed by a doctor and are generally used for only a short span of time due to the fact that they can trigger undesirable side effects such as glaucoma and muscle weakness. Corticosteroids are available as topical creams or nasal sprays. Topical creams containing corticosteroids are considered beneficial in treating allergic reactions on the skin. They are helpful in reducing itching as well as clearing up rash on the skin. Common side effects of using these creams include skin discoloration.