Bronchitis can be defined as an inflammatory condition of the main air-passages (called bronchi) to the lungs. It causes a cough, difficulties in breathing (dyspnea) and chest tightness. Coughing sometimes comes up with yellow or greenish mucus. 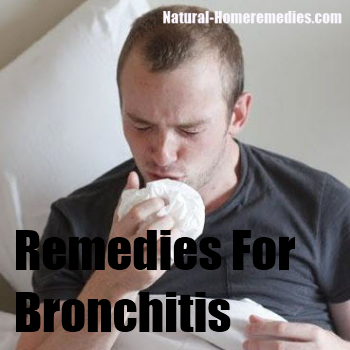 There are two main types of bronchitis:

Acute and Chronic. Acute bronchitis: it is often caused by the same viruses that produce colds. It generally starts as a sore throat, runny nose or sinus infection and later spreads to the airways. It can cause a dry cough, but it often goes off on its own.

Chronic bronchitis is a type of COPD (Chronic Obstructive Pulmonary Disease). Here, inflamed bronchi produce too much of mucus. This will lead to cough and difficulty to get air in and out of the lungs. Cigarette smoking is the commonest cause. Breathing in the atmosphere that contains other fumes and dusts for longer period may also result in chronic bronchitis. Causes of Bronchitis

In one glass of milk, add ½ teaspoon of dried turmeric powder and have it twice or thrice on a day. It is advisable to drink it empty stomach. This is one of the proven home remedies for bronchitis.

Onions serve great value as home remedy for bronchitis. One should consume one teaspoon of raw onion juice in the morning.

Take 50 gm of fresh spinach leaves and ¼ liter of water and add a bit of ammonium chloride and one teaspoon of honey to it. Consuming this mixture will work as a wonder in curing bronchitis. This is one of the best diet for bronchitis.

Another great home remedy for bronchitis is using warm castor oil planet leaves. Put them on a pan, heat them and make them cool. Spread on the chest for the night (caution is - castor oil planet is poisonous so avoid engulfing).

Another effective bronchitis remedy is that you can also mix mustard powder, equal amount of flour and water. Spread over the chest area. But do it with caution as some people might be sensitive towards the mustard and they might get sting, therefore, test on a small area first.

One of the proven home remedy for bronchitis is drinking fresh cabbage juice daily.

You can pour one cup of boiling water into one cup with grind/ cut horseradish root. Wait for about five minutes and have it. Repeat this three times a day. This is one of the best bronchitis treatment.

Put ½ a tsp of licorice root tea in one cup of boiling water. Wait for about ten minutes, strain and have it. Repeat the formula three times a day for about one week to treat bronchitis. This is one of the useful bronchitis cure.

In acute bronchitis, the sufferer can be on orange juice and water for at least couple of days on the initial stage. This is a good bronchitis remedy.

Take sufficient amounts of dried ginger, black pepper, and long pepper. Make a fine powder. This mixture is very useful if taken three times a day. This is one of the powerful home remedies for bronchitis.

Make an emulsion of almonds. This is done by making a fine powder of 7 kernels of almonds and mixing it in a cup of orange juice or lemon juice. This infusion can be taken once at the night. It will bring sound sleep without any interference of bronchitis. This is one of the proven best diet for bronchitis.

Some of the Ayurvedic herbs such as holy basil, licorice etc also work greatly as natural remedy for bronchitis. These herbs have proven track record for treating various respiratory tract diseases.

Ginger will serve as the best bronchitis treatment. For this, take about ½ teaspoon each of ginger powder, pepper and cloves. Prepare tea by using the mixture or else just lick this mixture with honey. It will help in boosting the immunity against allergy in patient.