Belching is also known as burping. They are simply the sound of gas that leaves the body. When one scarf downs the food or even nibble on it, they also swallow air. It is amazing that you suck much of an air while eating. If one is drinking pop with a meal, other gases are also swallowed such as - carbon dioxide which is full of bubbles. Those bubbles in the body do not just float around. They need to go somewhere. Generally, an extra gas will escape from the stomach, travel up the esophagus and come out the mouth. 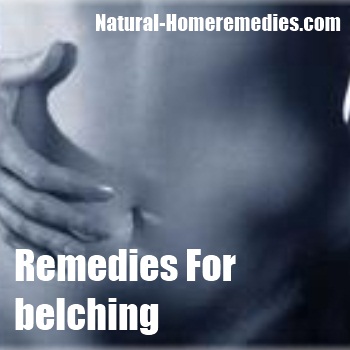 Soups are best as an aperitif. One can take it at least ½ hour before meals. It will help in digestion because they are ideal for replacing liquids and salts as well as stimulating the stomach to produce gastric acid. This is one of the useful diet for belching.

The best home remedy for belching is drinking water with two to three drops of mint essence daily for about 15 days. Mint has natural property to digest food in the human intestines.

If you want to prevent an acid in digestion, lime juice with cider vinegar in a glassful of water before meals gives good results.

A proven remedy for indigestion including blenching is having ginger tea after meals. It aids in promoting digestive power.

Some of the naturopaths suggest that herbal tea prepared using blackberry, raspberry, mint and chamomile helps in making digestion effective and it is a very good home remedies for belching.

Simplest and effective belching remedy is baking soda in a glassful of water gives you instant relief from burping.

Another effective home remedy for belching is taking a pinch of asafetida in buttermilk. This home remedy is in use since ancient times as helps in releasing gas

Simple home remedies for belching include sucking cloves after meals

A bud of garlic swallowed with water in empty stomach checks out gas problems and improves the digestion. This is one of the effective diet for belching.

One should avoid wearing tight clothes, and should have a daily walk for about ½ hour will be beneficial for indigestion.

Soaking little fenugreek seeds in water overnight and drinking it empty stomach early in the morning is an effective remedy for belching.

Latest clinical trials suggest that Yoga and Pranayama (breathing technique) will be extremely useful treating any digestive problem. This is also a very good belching treatment.