Cholera is highly infectious disease that is caused by a bacterium affecting the absorption of water in the small intestine. In more severe cases it produces violent diarrhea within only a few hours. 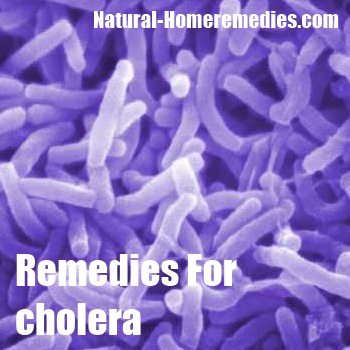 The dangerous face of cholera is the great loss of fluid that can occur in within a short spell of time. It is particularly very hazardous in children even in developing countries. If left untouched, the loss of fluid can be fatal within 24 hr of developing the condition. On the other hand, treatment is quite easy by just replacing the fluid with the right mix of sugar and salts, since water alone is not adequately absorbed in the intestines during the diseased condition. Nevertheless, bad cases do require admission into hospital at critical care unit where fluids are administered straight into the bloodstream via an intravenous injections or drip with different electrolyte fluids, glucose, normal saline etc.

Improved sanitation and hygiene are still the basic rules of the fight against this common though dangerous disease in those countries where it appears.

The best way is to take extreme precaution for not being exposed to the infected material. Drink only boiled water or water that has been sterilized. Hot coffee and tea, fizzy water and other unpolluted bottled drinks are generally safe enough to have. This is one of the natural remedy for cholera.

One should boil un-pasteurized milk before drinking it.

Another great home remedy for cholera is Onions. They are considered as useful food in the treatment of cholera. For this, grind about 30 gm of onions with 7-10 black peppers. Give this mixture to the person suffering from cholera in 2-3 doses on daily.

Cholera remedy - Avoid ice cubes in drinks, unless one is very sure that they were made out of pure water. Ice creams from doubtful sources are to be strictly avoided.

Diet for cholera - Food must be prepared in a proper hygienic manner. It should be hot when it is served. If it is allowed to stand at room temperature for several hours, microorganisms may attack and get seated there making it contaminated.

Strictly avoid raw fish and shellfish. They work as triggers for cholera. This is one of the useful cholera cure.

One should also avoid raw fruit and vegetables, unless you peel it yourself and wash them thoroughly. This is an another diet for cholera.

Natural remedy for cholera - One should be careful having food from street-stalls. If you have to eat such type of food, think carefully about preparation. Make it sure that it does not contain anything that has not been properly prepared in hygienic condition.

One of the best home remedy for cholera is preparing a special solution that is very beneficial in replacing the fluid in the body. For this, take one liter of boiled water and mix 8 level or 4 heaped teaspoons of sugar (white, brown or honey). Then add 1/2 teaspoon of salt. Consume this solution as much as possible.

The juice of a lemon or orange is great to have in cholera condition. One should also consume limejuice everyday, as it helps in killing the cholera bacilli. This is one of the simplest home remedies for cholera.

Cholera remedy - One can also mix one glass of fresh juice prepared from cucumber leaves and one glass of coconut water. Giving this in the dosage of 30-60 ml to the person suffering from cholera will act as a fabulous remedy as it also good for excessive thirst.

Fresh juice of leaves of bitter-gourd is also considered as great home remedy for cholera especially when it is in early stages.